Closing Lake Ainsworth's eastern road and transforming the space into a much needed parkland - for all of the community to enjoy...

Who is the Lake Ainsworth Interest Group?

Members of the Lake Ainsworth Interest Group include representatives of Lennox Head Residents’ Association, Lennox Head Landcare and Ballina Environment Society and have been following the plans and discussions to close Lake Ainsworth’s eastern road for an extensive period of time - the idea was first adopted by Council in 2005.

LAIG can be contacted through one of the associated groups (Lennox Head Residents’ Association, Lennox Head Landcare or Ballina Environment Society) or via email: Lakeainsworthinterestgroup@gmail.com.

Why do Council want to close the Lake’s eastern road? (straight from a Council document)

What are the driving forces behind the decisions to close the eastern road? (based on LAIG's knowledge of and understanding of plans/studies/discussions)

About the Lake and its water quality issues

Water quality is complex - but the biggest long term environmental problem for the Lake is nutrient enrichment - also known as eutrophication.  Nutrients are anything with phosphorus and/or nitrogen and are basically food for plants.  Too many nutrients in a water body lead to blue-green algae outbreaks and excessive aquatic weed growth.

Where's the proof that the Lake is polluted by nutrients?

Phosphate levels are widely accepted as indicators for nutrient pollution, as are symptoms of blue-green algae outbreaks and excessive aquatic weed growth.  Phosphate levels in the Lake have been consistently very high (in one report stated as ‘extreme’) since 1996.

The other nutrient, nitrogen, is hard to quantify because it is absorbed very quickly by plants and phytoplankton, hence phosphorus/phosphate levels are more commonly used as indicators.

Where do all the nutrients come from?

Nutrients which come in the form of silts, sediments, decaying plant material, urine, fertilisers, faecal material and in the old days from detergents, enter Lake Ainsworth through:
Over time, a massive bank of nutrients has accumulated and embedded in the layers of sediment at the bottom of Lake Ainsworth.  Some reports suggest that major contributors to this load could have been from septic tank seepage and a commercial laundry which discharged its waste into the Lake – but there really is no evidence to support these claims – just evidence that the phosphorus load is big!   The nutrients (in the form of phosphorus) stored in the bottom of the lake are only released into the water column under the right conditions - this happens when the sediment is physically disturbed or when the water becomes too hot and stratifies.

In 1997 Council made an urgent attempt to address blue-green algae problems by installing a ‘bubble plume aerator’ in centre of the Lake.  The aerator (still in use today) is designed to circulate and de-stratify the Lake’s waters - this in turn, decreases the amount of phosphorus being released from sediments into the water column.  To our knowledge how effective this has been hasn't been adequately assessed. 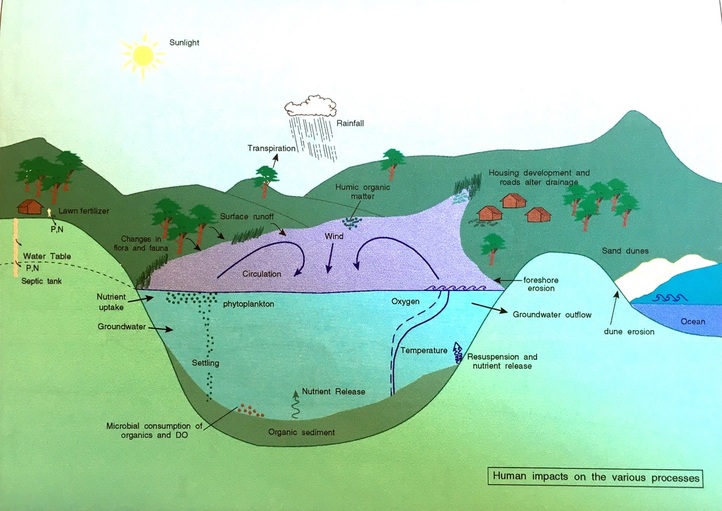 In a natural undisturbed ecosystem it’s the job of plants in the riparian zone (plants on the edge of a water body) to absorb nutrients before they enter the water body.  The plants on the edge slow water down and trap silt and other nutrients – they essentially act like a giant silt fence.  Another purpose of the riparian area is to hold the banks of the waterbody together and stop them from falling into the water.

Based on government guidelines, the ideal width of riparian zone for a lake is 40 metres – further information can be found in the Water NSW guidelines for activities in riparian areas

And some good general information about the values of riparian areas and the impact of stormwater on a water body can be found here:

How will the proposed works help the Lake?

Stormwater works and works to restore the Lake’s riparian zone are ways to prevent further nutrients entering the Lake through surface runoff.  In regards to the eastern road, currently there is no stormwater management, there are no drains, gutters, sediment basins or swales and furthermore we have a very disturbed riparian zone, and have essentially taken away the ability of the ecosystem to filter nutrients from entering the water.

Is closing the road the whole solution to fixing nutrient pollution?

No – but it’s a good start.  Closing the road makes space for works to expand and restore the eroded foreshore/riparian areas and stormwater management works.  These works will certainly assist in managing the loads of nutrients entering the Lake through surface runoff.

Pollution associated with runoff from our roads is what we today are responsible for, as is the demise of out riparian/foreshore areas.   Justifying not doing these good works by saying the Lake has bigger problems on the inside is frankly a cop out.  It’s akin to saying we should keep throwing our rubbish on the beach because the ocean is already full of plastic anyway.

Council have been promising to do something about the situation on the eastern side of Lake Ainsworth for a very long time – check out this Northern Star article from 2005.

What about harvesting nutrients?

LAIG are certainly interested in exploring options to harvest nutrients which have built up over time in the Lake’s sediments and will continue to consult with Council on this matter.

The current road is literally falling into the lake and there is a real shortage of recreational space and a serious conflict between cars, cyclists, pedestrians and Lake users.  In peak season, there are very limited safe spaces for people to walk or simply sit - Lake users are forced to sit right next to or even on the road.  This poses great safety concerns, especially to the elderly, less mobile and those with young children.  To LAIG’s knowledge there have already been two unreported incidents where pedestrians have been clipped by vehicles whilst walking beside the road.  There are also endless reports of pedestrians having close calls with reversing or passing vehicles.

Can we keep the road, manage water quality and address safety concerns?

In 2014 Council did propose an option to the community which included a road with appropriate stormwater management works and a less than ideal riparian zone.   Many people in the community kicked up a real stink about this option - and it wasn't so much for environmental reasons.  The proposed road which did somewhat address public safety and water quality issues, was a road with no parking anywhere north of the surf club.  The reason for this was - that if parking was included (say at the dog walkers’ car park) then we would be encouraging traffic down the road, and in a skinny corridor of land this would pose too great a risk to park users.  At the time many felt that the proposal looked very much like a driveway to the Sport and Rec Centre and considering that Sport and Rec already had alternative access, thought the land should be returned to the community as much needed recreational space.

In the summer months the eastern side of the lake is the perfect spot for people to enjoy the outdoors - the dunes provide shelter from the north-easterly winds and the paperbarks offer plenty of shade.  This area is prime recreational land.  LAIG firmly believes that closing the eastern road will provide space for a fantastic expansive parkland for all of the community and visitors alike to enjoy.